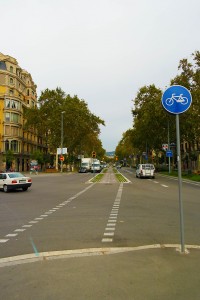 It’s been a very busy couple of months since our trip to the Netherlands. I’ve been doing some work over in South Africa so I’ve done absolutely no cycling, and had little time to post anything. There’s way too many violent muggings for bicycle camping to be a worthwhile venture there! The roads can be pretty dangerous too. I’d say it’s only for the hard core riders!  Before South Africa though I did manage to squeeze in a holiday in southern Spain, and was pleasantly surprised by the level of cyclist infrastructure. A fair amount of well thought out cycle routes through the cities, places to chain your bike and in Barcelona there were even “grab and go” bike rental points placed all around the city. Being such a warm country with plenty of camp sites as well could make this a great location for a future bike camping journey.