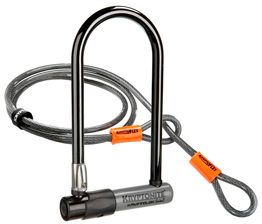 The KryptoLok Evolution series 2 seems to gather very mixed opinions. The majority of people say it is fantastic but a surprising amount of people seem to have problems with the lock becoming jammed or simply find that their bike is stolen with seeming ease. This is a little worrying for a “sold secure” silver level lock (recommended for bikes worth up to £800).

My personal experience with this lock has shown me 3 things I don’t like about it.

1- they key seems too fiddly, which worries me when a lot of people have complained about the lock jamming.

2 – it’s quite heavy, but that’s standard for a beefy lock.

3 – the weigh wouldn’t be a problem if the so called EZ-Mount bracket was any good. The bracket uses a fastener something like a fat cable tie, which a nut and bolt at the other side for fine adjustments. After trying the bracket in one position and finding its no good there, I tried to take it off again. The instructions say to insert a screwdriver into the clip of cable tie like part and leaver it open. Unfortunately the hole for the screwdriver is weaker than the clip itself, so the plastic just mangles and then the screwdriver slips out and you stab your hand. Once you finally have it in the place you want it, you try to tighten the nut and bolt to make it nice and secure but they’re made out of such cheap metal that the thread wears out and just slips loose every time you turn it.

The locks only saving grace is that the D-lock and cable combination allows both wheels to be secured and it looks like a good deterrent. I’ve used it a fair amount in high theft areas, and so far no one has knicked my bike. One thing to remember with any lock, is that a determined theef will get through it eventually. The bigger beefier ones just take longer to cut.

Kryptonite KryptoLok Series 2 Standard Lock & Flex Cable, 5.0 out of 5 based on 1 rating